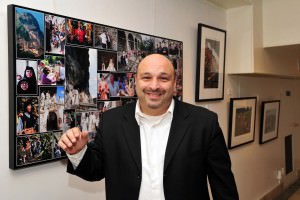 Eleftherios Kostans is a veteran international photographer who has worked for a variety of organizations, agencies, and publications. His work has appeared in Time, Newsweek, People, Odyssey, and Wired magazines.

While serving as a contract photographer for the Philadelphia Inquirer for 10 years, Eleftherios became a correspondent for Sipa-Press Agency in New York, where he covered regional, national, and global news. As staff photographer at Swarthmore College, his magazine work was recognized by the Council for the Advancement and Support of Education. He currently contributes to a variety of educational institutions, media groups, films, and other projects.

Eleftherios’ personal work in Eastern Europe and the Black Sea region focuses on Hellenism. His documentary photographs of the Pontian Muslim Greek community in northern Turkey were the first such work about this ancient Greek culture to be exhibited at the Greek Consulate in New York. This sustained body of work was also featured in a special report by BBC Radio 3. He has also worked on films such as In the Footsteps of the Argonauts and is a regular contributor to Amastris, the Greek magazine that features news, history, and photography about the ancient Black Sea Pontian culture.

Named by the Greek American News as an up-and-coming artist in 2001, Eleltherios has been interviewed by both Greek and Turkish television and radio and has been featured in Greek News and DailyFrappe.com. for his groundbreaking work on Black Sea culture. His work has been exhibited from Istanbul to North America and at many community events, where it educates youth and reminds the greater Greek community about the wide reach of Hellenism in the Black Sea region.

He has been awarded grants from the American Hellenic Educational Progressive Association of Washington, D.C., and the Pan-Macedonia Association and Pieria Society’s of Philadelphia.

Eleftherios is a co-founder of Cosmos Philly, a community-based Web TV and media program. He develops stories and directs news and documentary films about the Greek community of Philadelphia and Hellenism at a global level. As an experienced maker of both photography and film, Eleftherios is available for assignments, exhibitions, and lectures both nationally and abroad.